BUILDING A PIECE: PART ONE

THE ART OF THE ART
The Process of Inspiration
The spirit of idea forms in it's movement  a response to the gut, the heart, the groin, the physical twitch of a vision. Momentum from this experience can propel the artist into the mist of creativity, a spark of clarity into the depths of the unknown.
The following photos represent an attempt to define the process of building a painting and articulate some of the response to the ever present process of observing and working. 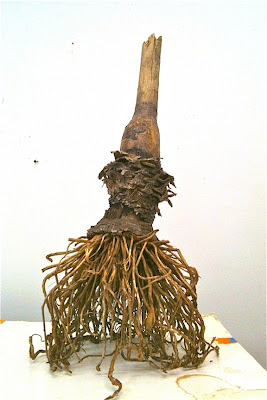 Deceased Agave  Root and Stem Base
Initial response to this Agave root and stem was one of amazement at the sculptural structure and the preserved nature of a deceased plant material. It suggests many images and metaphors. Wanting to honor it and it's kingdom, of which I am fond of, I started searching where and in what context it might find it's way.This is a starting point of the creative drive behind my work and the inspirational Mystery becomes the thrust of the piece. 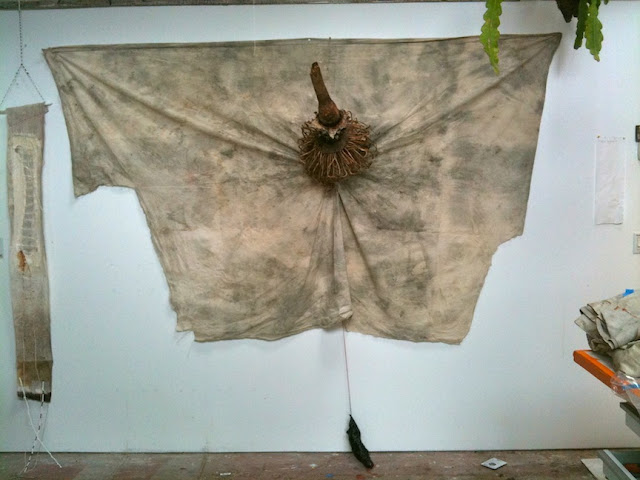 Painter's Drop-cloth with Agave Root
The Sketching Process
This tarp which had been moistened, folded and left outside was the second item of inspiration for the painting no intent was made at thinking about it other than a wonder in the molding process taking place on the surface of this unusual unintended form. The shape, scale and organic surface moved me to envision some kind of heroic cloak, shirt or cape a vague kind of iconic vestment. It sat in this placement on the studio wall with the agave root for a few weeks as I would pass by and glean something that it might say as to its next incarnation, an assemblage of the inanimate to the animate, a  glimpse into the mystery of a vision, an articulation of some breath from the mystic. 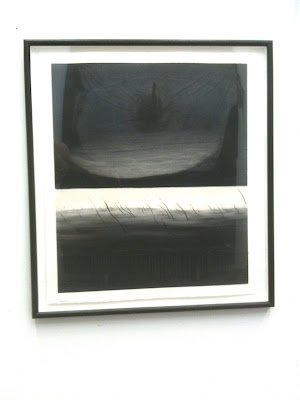 Finding A Way: The Graphite Painting
As the draw to dive into a large scale piece, based on the hanging tarp and plant grew, I stumbled upon a graphite and alkyd painting from 15 years back titled "Surface" (above). That was the voice from the mystery that led the way. For a week prior to finding "Surface" I had been pondering the title for a piece or exhibition that contained that word. This is the kind of magic that inspires the momentum for my work. A happenstance of chance and being, open to the observation and flexibility to bend to a given direction from and into the unknown, the Mystery. 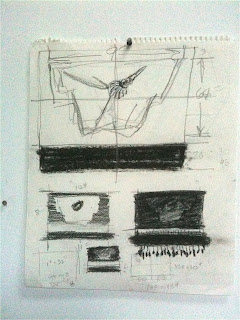 Conceptualizing:  Drawing some possibilities
Next was drawing some potential visions of components and combinations of value envisioning some type of Mass hovering over a landscape similar to the graphite painting from 15 years ago. 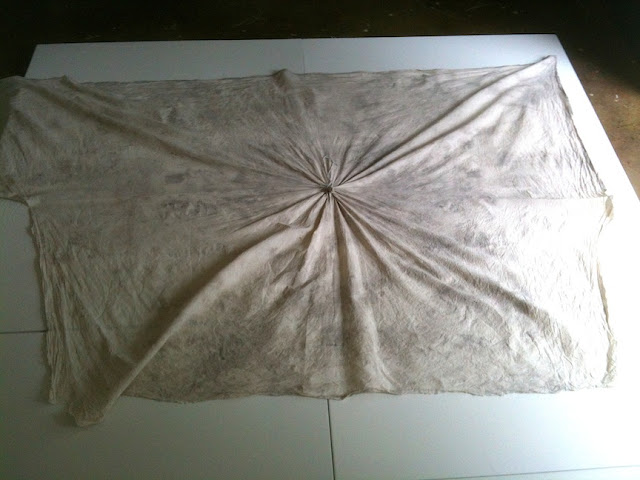 Beginning the process: Grounds and practical considerations
To accommodate the size of the tarp and create a similar format as the graphite painting I needed a ground that would measure 10' x 8'. I opted for a vertical rather than the concept drawing that was a horizontal format and reused four previous canvas on stretchers that measured 4' x 5'2" each. this translated into a 10'4" high by 8' wide finished piece of four joined gessoed canvases split at the middle. This will allow for storage, shipping and working on the floor in a more economical way.
The tarp was steamed leaving the mold stains in a halo state. It was then gathered where the agave root would be positioned this created a series of natural folds emanating from the focal point. 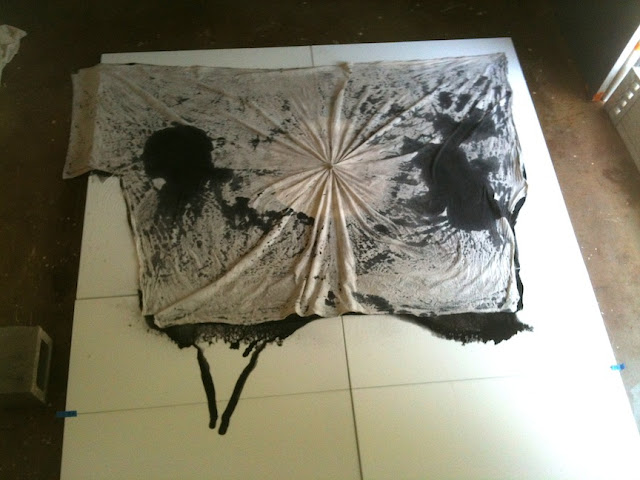 Placement and underpainting
The opportunity to have imagery appear from behind the tarp  was cued off the original mold stains on the tarp. I traced the outline of the placed tarp, removed it, and painted a black gesso mirror image of the shape, leaving the central circle for the agave root, blank. Then the dry tarp was placed over the wet  black acrylic gesso, to blot, hand smoothed and left to dry.
The thin line below the image is string taped on either side as a horizon reference to allow for positioning  of the tarp relative to the whole composition and layout masking between the upper and lower portions of the piece.


The detail below is black gesso creeping past the horizon reference an unintended consequence that will later prove to be unintended on my part but not the consequence of the Mystery process. 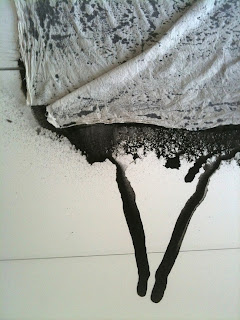 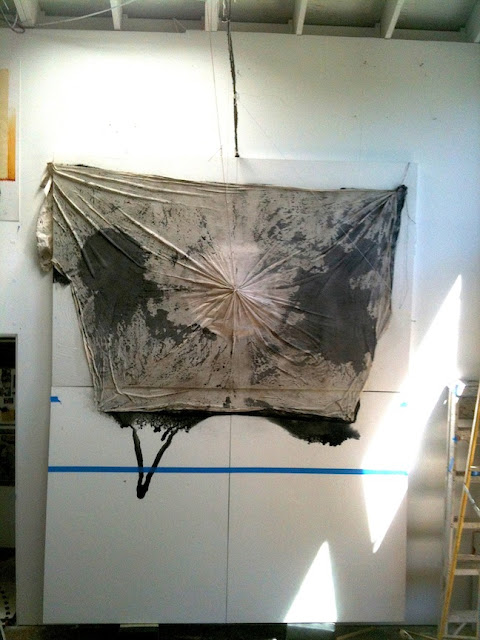 Bonding
In this view the tarp has been manipulated and glued to the surfaces, except at the central circle, with an acrylic gel medium. The horizon is now masked with tape to delineate a shift between the two desired spaces of content. While the whole piece was on the floor and the bonding dry , the tarp was cut along horizontal meridian so that the top canvas section could be separated from the lower canvas section as mentioned in the beginning of the process.. 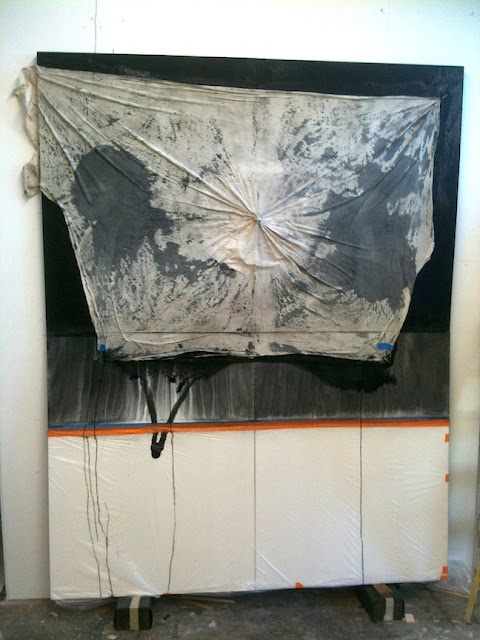 The Void
Based on the graphite painting the area around the tarp, The Void, is now value rendered using various wet on wet techniques with acrylic. Note that the lower portion is masked with plastic to preserve the white surface as a fresh ground of light on which to work. The composition is still following the dictates of the graphite piece but presenting it's own dictates that move the work in unexpected and magical ways.
The detail below illustrates a method of platforming enabling  one to work over a large inaccessible surface. 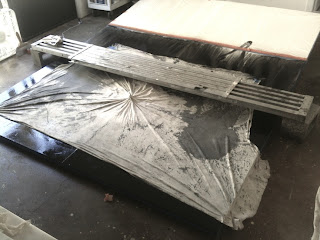 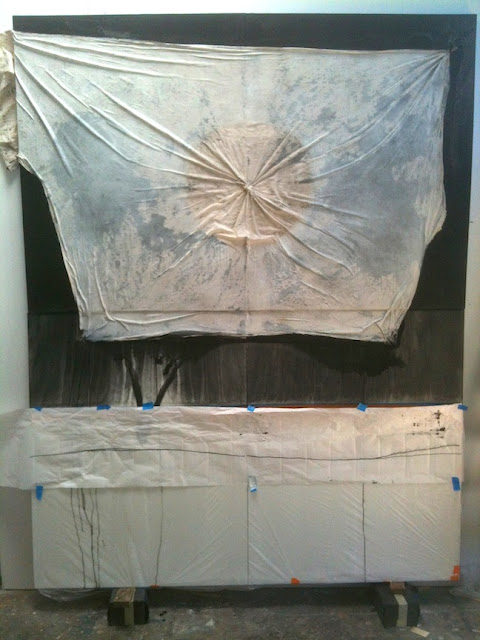 The Mass
At this point the tarp (Mass) was competing visually with the Void. To mitigate this, the surface of the Mass was sealed with acrylic medium and over glazed with a white tinted acrylic medium in an attempt to calm that surface down and allow the Void and Mass to exist visually together in a non competing way on the same picture plane.
Now that the upper portion is gaining direction it was time to start laying out the lower portion of the piece. What is visible in this view is a piece of paper at the horizon with an initial layout of charcoal line that will describe the distant horizon in the lower portion similar to the graphite painting. 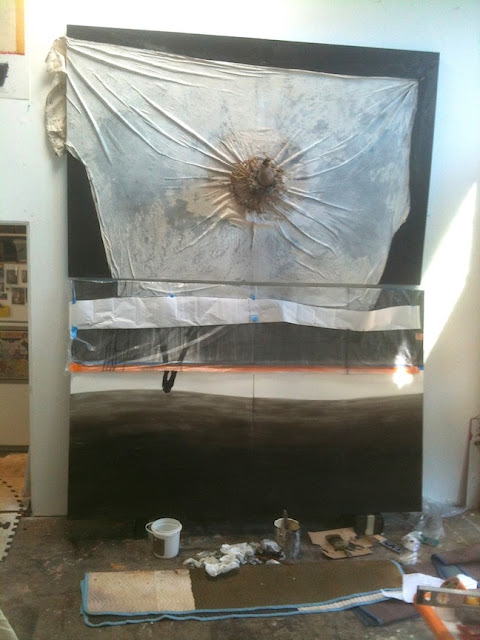 The Surface
This section of the piece is following the graphite painting fairly close. Graphite on this ground was unserviceable so I moved to charcoal, solvent, and alkyd for the base rendering to allow a lengthened snap time and enable  the manipulation of the combined mediums on the surface to achieve the desired effect of a landmass type surface.
Note the cut template taped above which described the undulating horizon. Also the agave root (Form) was hung to further encourage dialogue between the parts. 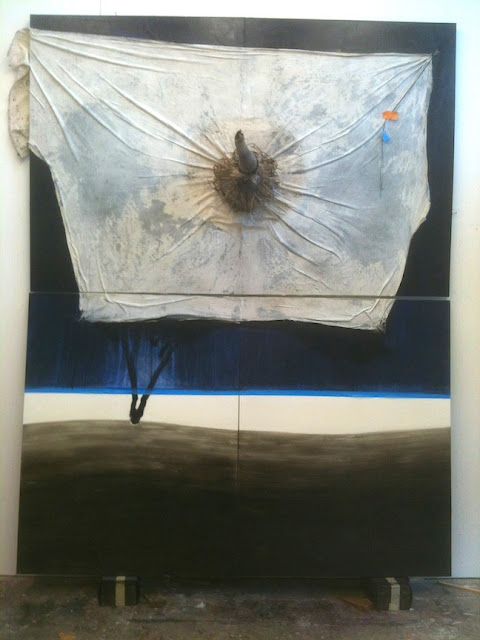 Glazing the Void
The lower surface needed a couple of days to dry so back to theVoid with an overglaze of oil ultramarine blue. Brushed onto a surface of wet clear alkyd medium. The paint was softened to a sheer translucence and blotted to bring back some of the light whiter values in the background.
At this point the piece is feeling solid in it's aspects of foundation and cohesion. The lower portion is ready for articulation . The upper is uncharted territory waiting for the whisper.

BUILDING A PIECE: PART TWO  will continue on the next posting.

All photos and text courtesy and copyright of Glenn Carter
Posted by Glenn Carter at 6:08 PM No comments:

TOPOGRAPHY PART TWO: THE SURFACE OF A PAINTING

THE SURFACE
Some paintings are as much about the surface as the subject and one often echoes the other.
Texture, sheen, quality of feel, a seductive topography of disparate materials and imagery.Traditional viewing of paintings is full frontal, head height or such. The opportunity for viewing as the painter can , while in process, is not typically offered a viewer. Changing one's view can often lead to changing one's perspective of the observed reality that we are engaged in at that moment and in turn this new way of seeing can open up other moments of a new clarity. 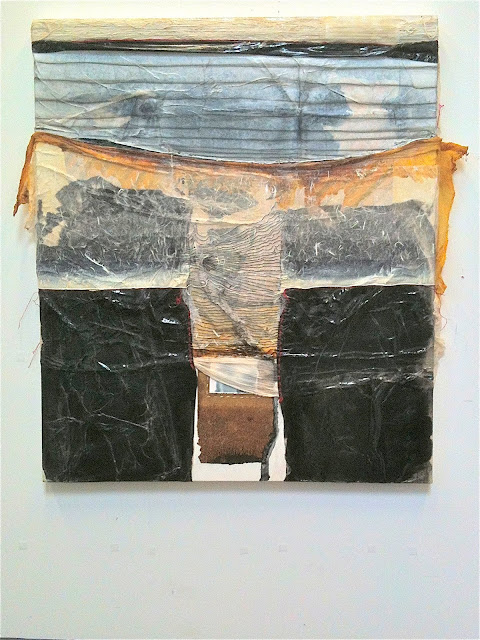 Note: the following pictures (from the painting above) are images of a happenstance in the painting process and were only observed  close to completion of the piece. There was no intention toward a specific description of land and water merely a fluid state of resolve in the process of painting and composition. That being said, the work is land based abstraction and this leads to the larger mystery of the interconnectedness of time, space and being.

The New Perspective: An Alternate Viewing Experience (below)
The surface seen flat and looking across the upper mid section from the left side to the right. The photo is a poor example of the surface relief, but one can appreciate the altered vantage point of such a view. 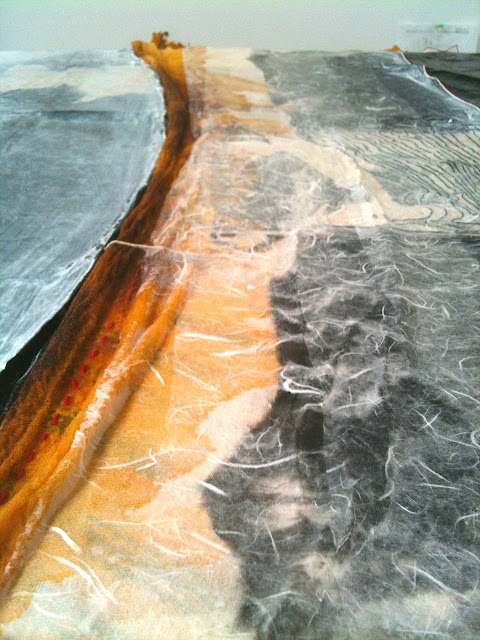 Listening to the Water (below)
This view (flat) is looking across the lower mid section right toward the upper left hand corner. The foreground is sumi ink on mulberry paper finished with a gloss acrylic varnish. A group of red strings transitions to a more varied paper on top of numerous other papers and thread. White over glazing and a dull varnish finish give a depth illusion. In the distance garnet shellac on cheesecloth and paper. 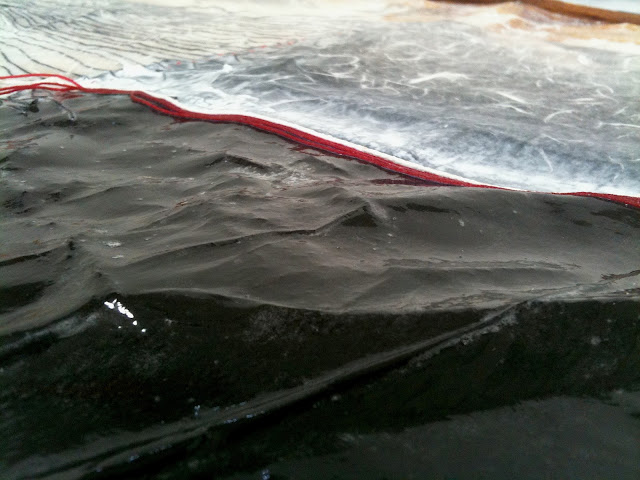 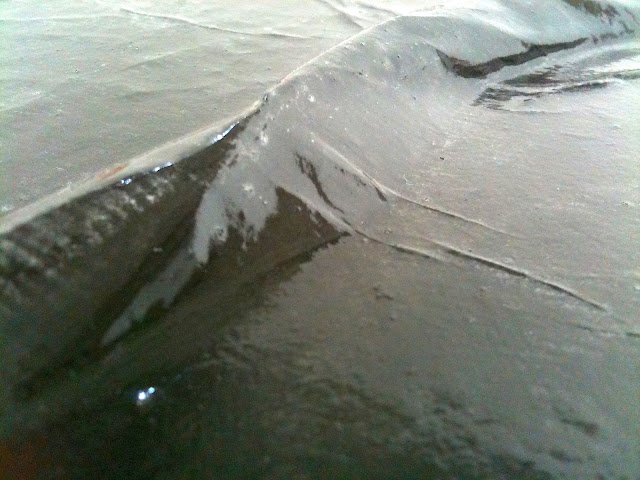 Detail View:  Looking from the bottom of the piece towards the top 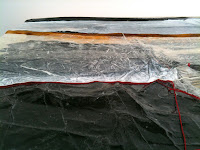 Detail View: Looking from the top right hand corner of string and wax a sumi paper ridge breaks to a water like surface with a shellacked cheesecloth beach in the distance. 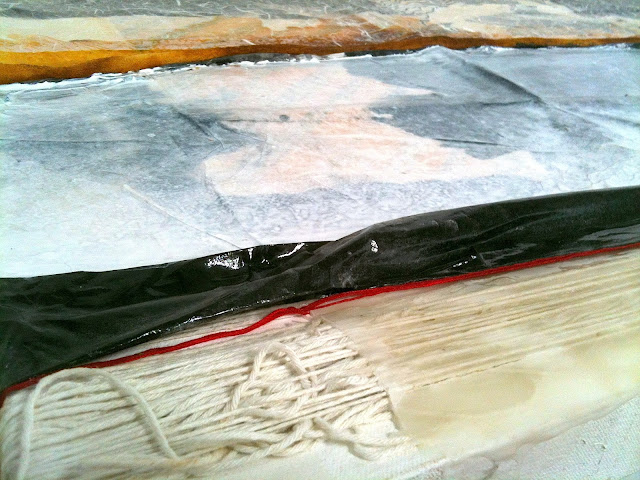 Views Along the Edges
The often ignored side edges of a painting can become a landscape unto them self. This view is of the top right hand corner. 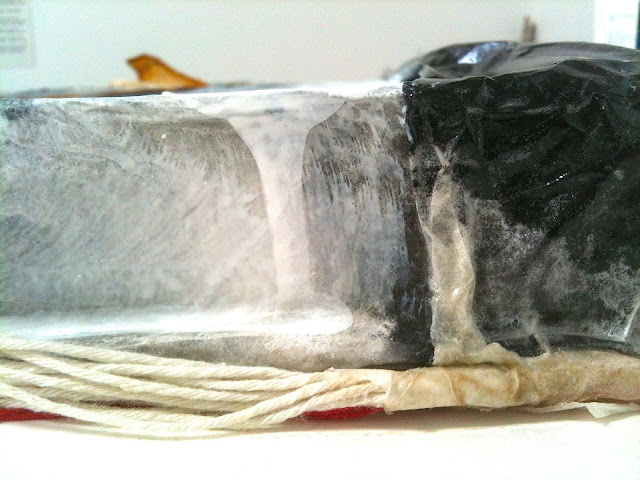 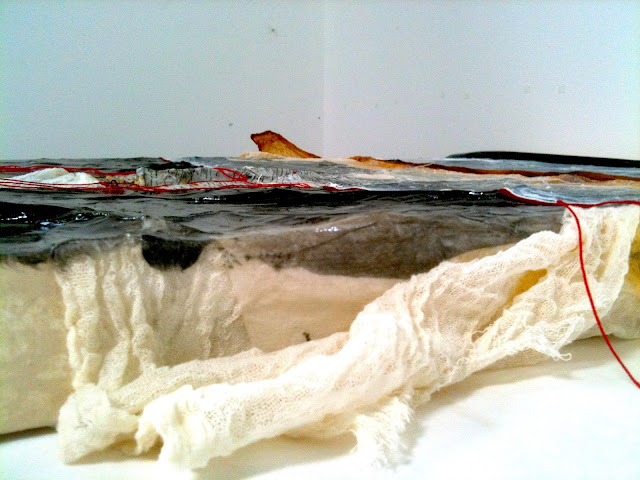 Detail View: The strong relief in this piece becomes apparent in this view looking across the center field towards the upper right corner prior to vertical red string install. 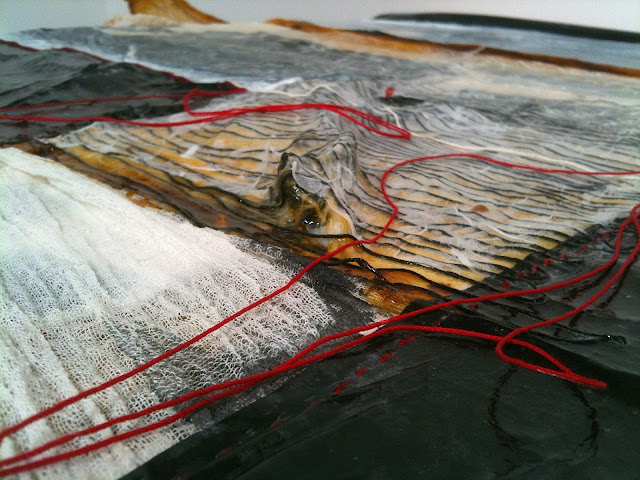 Mystery Below the Surface: This is a view of the upper section looking form left to right. The dark form beneath the layer of the light glazed paper is bulging at the skin like surface. As if a life form is residing below this sheer translucent shell. 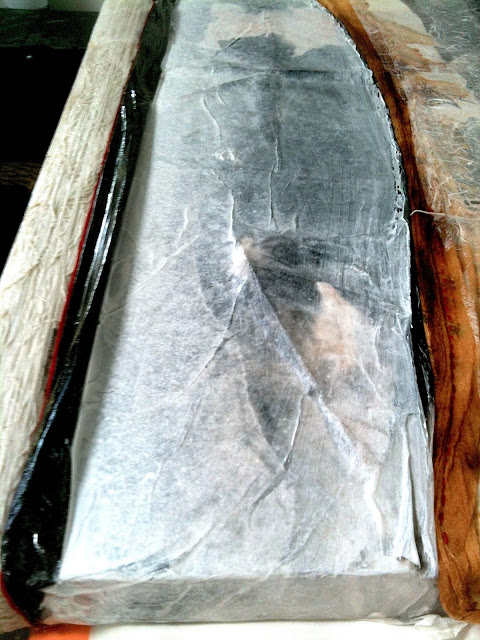 All photos and text courtesy and copyright of Glenn Carter 2012