CONTINUATION of the post from June 27, 2012 titled
BUILDING A PIECE: PART ONE 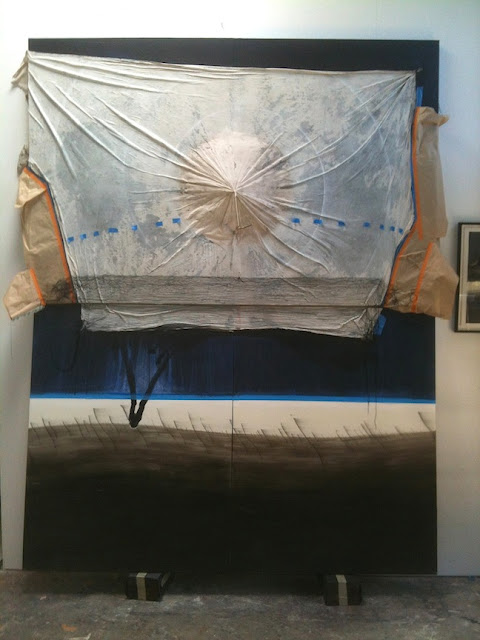 The Surface and Mass
At this point I made a decision to keep the lower Surface section as a drawing and painting area and continue to elaborate the Mass section as sculptural using collage and build up techniques.
The Surface was next to be developed according to the graphite painting, to which I was staying faithful.
. The hairlike branchless tree forms were laid in with charcoal and dragged with a dry brush to pull the pigment in a horizontal sweeping direction, fixed and the entire lower section was finished with a gloss acrylic varnish.
The topography of the Mass surface required further description and laying black lines of string across the surface offered that ability while echoing the horizontal in the lower section. The string was glued with acrylic medium on to the tarp surface.
The detail below illustrates an effective way to pursue the string gluing on a table type elevation.
Note the center of the tarp (the unbonded circle) was cut open and stuffed with towel to create the mound effect so the strings would follow the contour of the eruptive surface from which the Form will appear to be emerging. 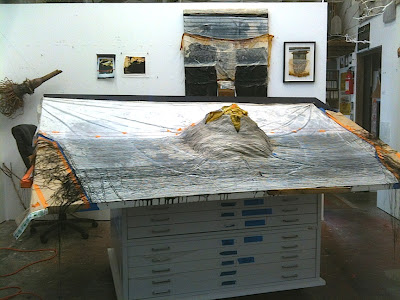 The detail below illustrates the means of keeping the ongoing layout of black string in a relatively level positioning. Also the white glaze over the black blotting on the tarp surface is easily visible.
Below that is a side view detail of the Mass surface in a wall mount position. 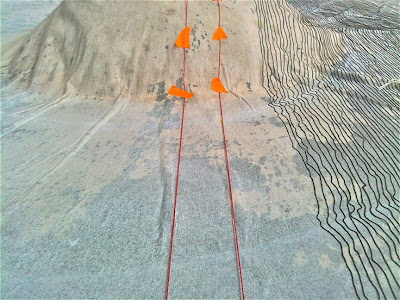 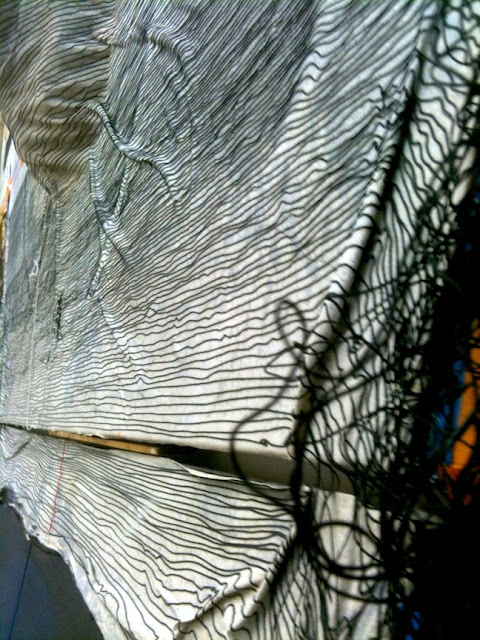 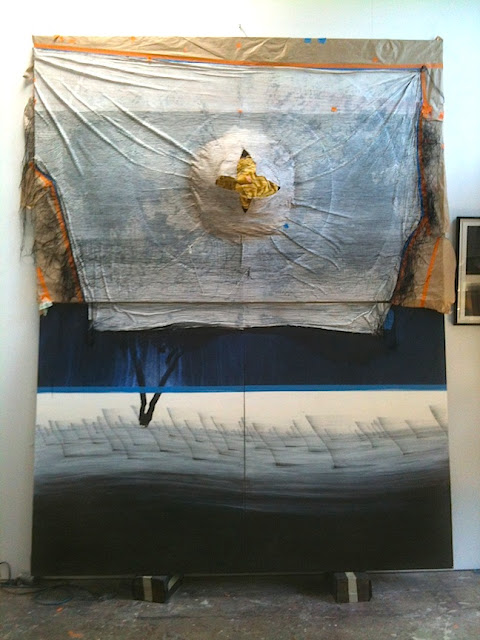 Surface Development
As the lines of string are being glued onto the Mass, a time consuming and arduous process, the Surface was also being worked on. In this photo glazes are starting to describe the quality of atmosphere over the landscape that would convey a sense of passing and vagueness like memories moving through one's view. 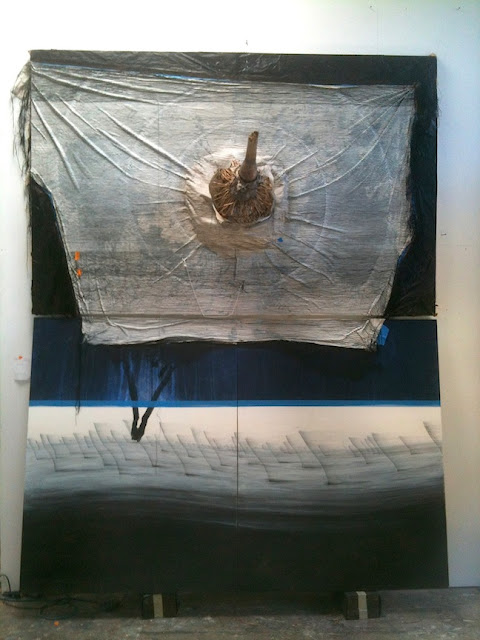 Mass Nearing Completion
Upon completing the first pass of string glue down across the entire surface of the Mass a further articulation of the surface was required to create the sense of a more living type surface, a back and forth, an in and out, of the parallel lines, less of an even look and a more atmospheric effect. Interior Face of The Focal Point and the Spiral
The inside face, the background base for the Form, was lined with silver leaf and a red dye mulberry paper was varnished over it. This allows for a strong reflective surface behind the translucent red dye. A dot pattern was scratched through the wet dyed paper during the adhesion process.
To maintain the elevation of the surface of the mound a screen collar was fabricated and installed similar to the base of a cone.
Also of note is the definition of the spiral emanating from the focalpoint. The spiral was drawn on the surface of the tarp soon after the white glazing process with pastel and is flat, not in relief. The illusion of relief was achieved by arcing the string over the line consistently as each string was laid out, just like drawing. 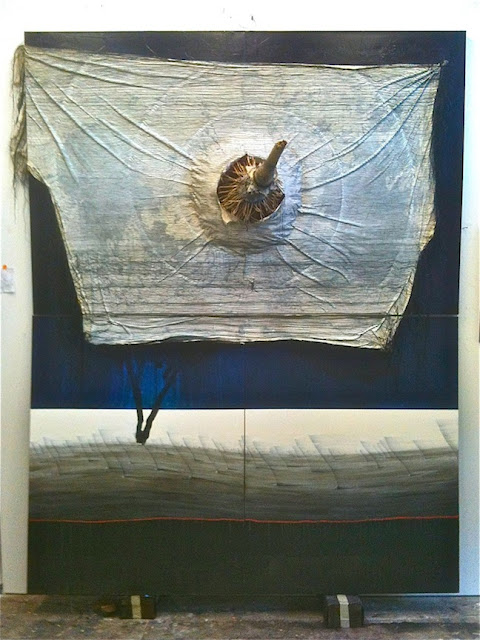 Finished Piece
The Surface was glazed and manipulated a couple of more times, as was the Void, to further the desired effect of deep space and distant memory.
A passage of black acrylic was applied at the very bottom portion and manipulated with water and gravity to further the dialogue with the Void and create another atmospheric break delineating still another space of psychological interest. It represents a cutaway side view of the Void behind the Mass. This entire section of the piece is a perspective shift. The Mass-Void portion viewed from above looking down and the lower Surface portion, a side view of the Mass-Void portion.
A red oil bar was dragged from one side to the other echoing the red behind the Form and adding to the visual interest and connecting that part of the theme of the narrative. 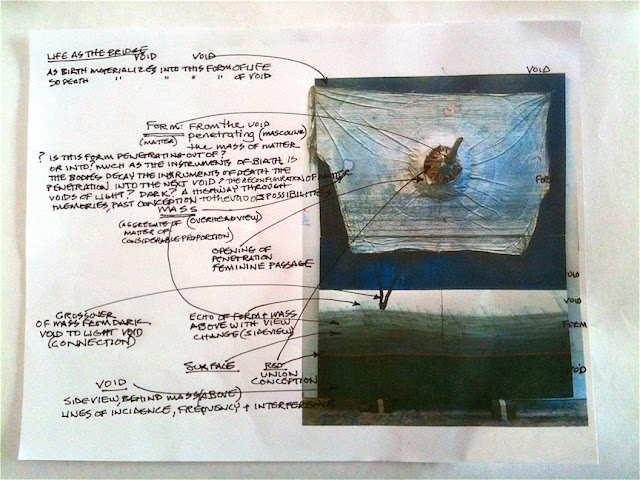 Thoughts, Metaphors and Narrative
The notes on the photo above describe some of the layering of  concept behind the piece.

All photos and text are courtesy and copyright of Glenn Carter
Posted by Glenn Carter at 8:11 PM 1 comment: